FREE SHIPPING ON ALL ORDERS to LOWER 48! 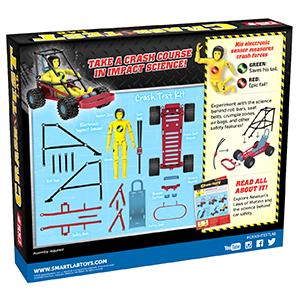 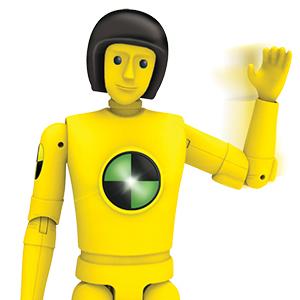 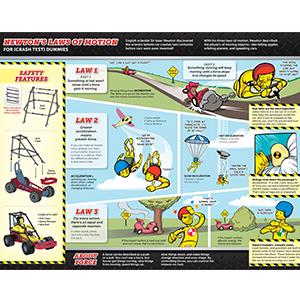 Test the limits of crash testing with the customization crash cart. Experiment with the science behind roll bars, seat belts, crumple zones, air bags, and other safety features!

Your mission is to project Impact Jack! Jack has an impact sensor inside his torso that responds to crash forces. The color of the light in his chest tells you the results— green means Jack survived the crash test unhurt, red means he needs better protection.

Young scientists will apply the Newton's Laws of Motion to learn the physics of moving objects as they perform crash tests with Impact Jack.

At SmartLab, we know that something wonderful happens when parents and children share light-bulb learning moments. That’s why our toy and game designs focus on hands-on experiences that help nurture strong family bonds. Since 2008 SmartLab’s S.T.E.A.M. toys have earned more than 50 of the toy industries’ most prestigious awards including multiple Oppenheim Platinum awards, Good Housekeeping Best Toy awards, and Family Fun Magazine Toy of the Year awards. SmartLab’s passionate team of toy creators lives and plays amongst the beautiful mountains and lakes of the Seattle area.

Build your own test crash car and dummy. This set will teach your children about physics and how they work when applied in motion. The dummy named Jack has an impact sensor that goes off and shows when he has been in a crash by his LED light that indicates that if Jack survived the crash (green) or did not (red). The red will tell you that he needed extra protection when doing his job! This is what happens in real life operations that car manufactures perform so that they may make vehicles the safest possible when people drive them down the road. Your child will learn about physics and a whole host of different engineering when toying with this makeshift set.

Free shipping on all orders!

We're not satisfied if you're not

Returns and exchanges accepted. Larger items may be subject to a restocking fee.

All payments are processed securely. We don't have access to any credit card information.